Maple Syrup can be so much more than just a tasty treat. At The Nature School, we embrace the maple syrup season and allow our students to learn through asking questions, determining solutions, and collaboratively making their own maple syrup.

In the outdoor classroom, the learning started with determining what kind of weather and what trees would be best suited for maple syrup. This led us to identifying different species of maple trees and observing weather temperatures using a thermometer. We discovered that it was colder at night and into the morning, but warm during the day: the perfect temperature for sap to run.

One student suggested that we should use bigger trees with a bigger circumference to collect more sap. To collect the sap, students immediately knew that we would need to get holes into the trees using hand drills.

After discussing the safety of the hand drill and how it should be used, students got to try using the tool to drill holes into the trees. Students then inserted the pointy end of a spile into the hole, and hung a bucket with a lid underneath to collect the sap.

Once the buckets had been hung, students were beyond excited for them to start filling up. They couldn’t wait to return the next day and see what their buckets had collected. 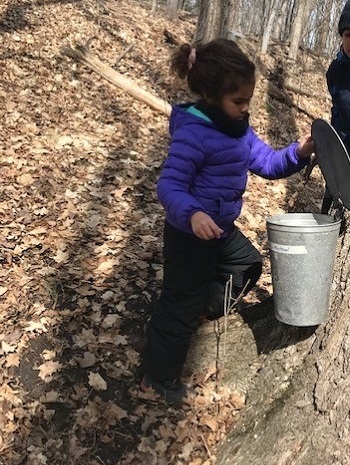 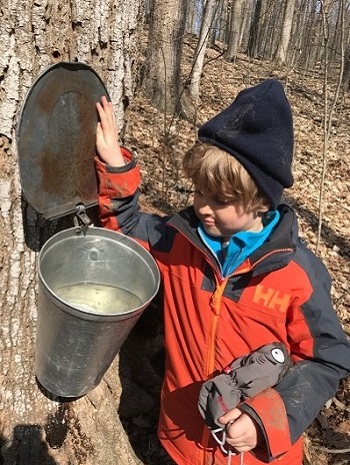 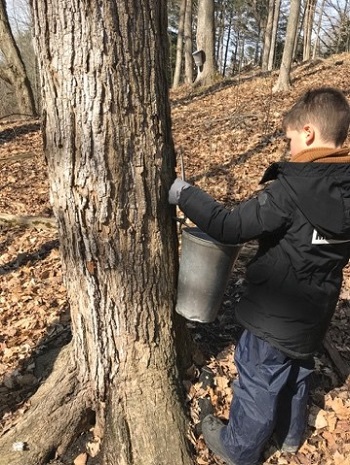 Students ran from tree to tree checking their buckets, and excited chatter filled the air: “There’s so much sap, come look!”, “It’s dripping, wow!”, “It collected so much!”, “My bucket has so much, and the tree is so big!”, “Look! That’s a lot!”

V. yelled out that we now have maple syrup, prompting S. to reply: “It’s not maple syrup, this is the sap.” Added C: “Sap can turn into maple syrup, we just need heat!” “We need to make a fire,” announced another student. They were learning from one another, and working collectively to find solutions.

Students discussed making the fire and collecting the sap, offering suggestions and listening to one another. C. proposed that we should pour all of the sap into one bucket and hang the rest of the buckets back up to collect more sap.

Soon enough, some students were making a circle with rocks for the fire, some were grabbing the firewood, and others were grabbing their buckets of sap from the trees — real teamwork! Before we knew it, we had a hot fire with a kettle above.

Next, we added sap and made hypotheses about what would happen next: Would the sap disappear? Would it boil? Would it take long? Or change colour? Could we eat it?

Then came time to test these hypotheses! We discussed boiling temperatures and the process of evaporation, and checked the temperature of the sap, the air, and the campfire using the thermometer. 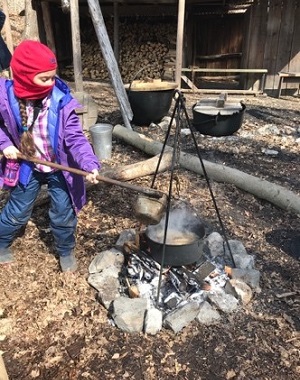 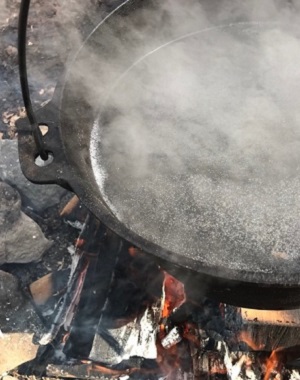 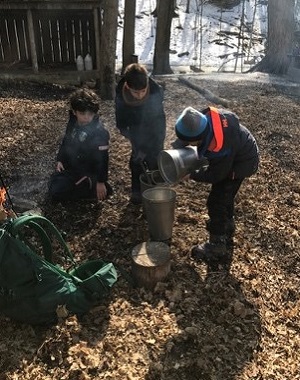 Through student-led discussions, we explored why sap comes from trees, why some trees produce more sap than others, why the sap starts to bubble when heated, how the consistency of sap changes, and how the sap turns into maple syrup.

E. said, “There is less sap, it is leaving.” Another student chimed in: “It’s evaporating.” “Can I add more?” asked M.

When we added more sap, we discovered that as it evaporates it bubbles and becomes darker. We began to notice that it had taken on the consistency of maple syrup, and added still more sap.

During the process, a student noticed leaves in the sap. Could we get them out? An old bucket with holes in it was near at hand, H. said: “We can just use this and make more holes in it to make a strainer!”

At The Nature School, we often learn through becoming directly involved in a learning experience — like making maple syrup!