For the last week and a half, our teachers have brought the outdoors inside through an inquiry-based learning approach. This is a flexible process that builds on students’ natural curiosity about the world around them.

Usually this learning starts with a question from students or teachers and continues from there. Lately there have been lots of questions about winter as the weather outside gets colder and snowier. For example: how do snowshoes work, or how do some animals adapt to walking in deep snow?

To test this out, Ms. Averry conducted an experiment using flour, a toy lynx, and cardboard.

She started with the lynx in his summer paws (no cardboard) and placed him gently in the snow. Then, to imitate walking, she pushed the lynx down on the flour. The students observed that the second set of footprints were deeper than the first — because when you walk you place more weight on each foot.

Next, Ms. Averry added the snowshoes (circular pieces of cardboard) to the lynx to represent his winter paws, and placed him in the snow. The students noted that the lynx barely made a mark in the flour, even when pushed in harder.

D. asked to see the lynx with and without snowshoes side-by-side, and commented that the one without would fall “really deep” in the snow. This experiment led students to discover how lynx have adapted to the snow: their large furry paws act like snowshoes! 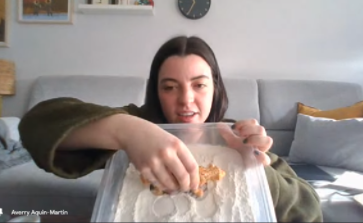 Ms. Averry showing our students the lynx’s footprints with summer paws (left) compared to the footprints with furry winter paws, represented by cardboard, that act as snowshoes (right).

To take their learning one step further, students were invited to participate in a design project challenge! The goal was to build their own snowshoes made from recyclable materials such as cardboard boxes. 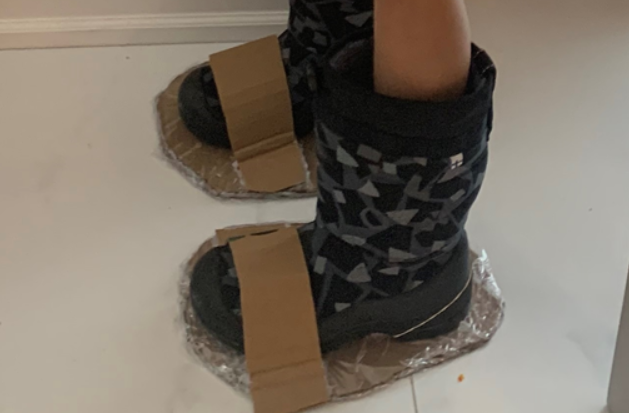 During Ms. Jen’s virtual class, students were asked what makes a good snowshoe? They thought that snowshoes need a big base, have to attach to your boots, be able to hold your weight, and of course, they have to be able to get wet.

Those students who made their own snowshoes were encouraged to share their design and their findings. In the example shown here, A. has created snowshoes out of cardboard boxes to slide on like slippers. There is also an elastic in the back of the snowshoe in order to hold the boot inside. And is that waterproofing I see?

As we transition back to in-person learning, we are looking forward to more exciting discoveries in the snow!